This post is a part of the series "Reverse engineering the rendering of The Witcher 3".

So far, almost every effect/technique explained in this series was not really Witcher 3-related. I mean, you can find things like tonemapping, vignette or calculating average luminance almost in every modern video game. Even drunk effect is something quite widespread.

That's why I decided to take a closer look at "witcher senses" rendering mechanics. Since Geralt is a witcher, his senses are much more sensitive comparing to an ordinary human. Therefore, he can see and hear more than other people which greatly helps him with solving his investigations. Witcher senses mechanics allows player to visualize these traces.

Here is a demonstration of this effect:

And one more, in better lighting:

As you can see, there are 2 types of objects: the ones Geralt can interact with (yellow outline) and traces related with investigating (red outline). Once Geralt investigates red trace, it can turn to yellow one (video #1). Please note that whole screen gets more grey-ish and a fish-eye effect is applied (video #2)

The effect is quite complex so I decided to split it across three blog posts.
In the first one I will describe selection of objects, in the second one - generation of outline and the third one will focus on final combining all this together. 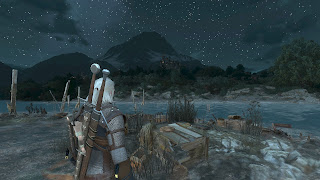 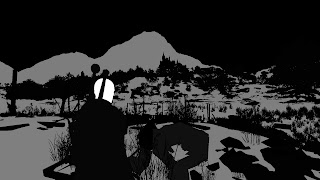 Stencil buffer is generally quite often used to identify meshes drawn by assigning the same ID to certain categories of meshes.

The idea is to use Always function with Replace operator once stencil test passes and Keep operator in other cases.

Here's how to implement it with D3D11:

Stencil value to write to the buffer is passed as StencilRef via API call:

For this pass, in terms of implementation there is one R11G11B10_FLOAT full-screen texture which will be used to save interesting objects and traces in R and G channel, respectively.

In terms of intensity - why exactly do we need it? It turns out that Geralt's senses have, well, limitied radius so the particular object starts to be outlined when player is close enough.

See this aspect in action: 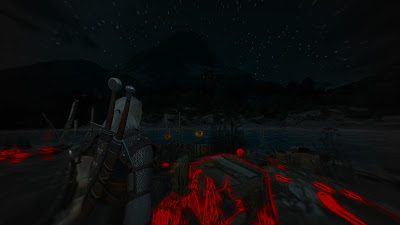 We start by clearing the intensity texture with black color.
Then two fullscreen draw calls are peformed: the first one for "traces" and the second one for interesting objects: 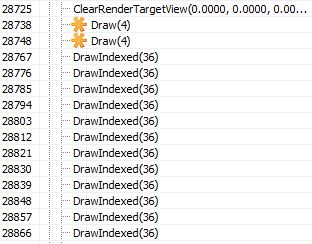 The first draw call is for traces - green channel: 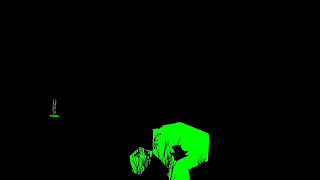 And the second one for interesting objects - red channel: 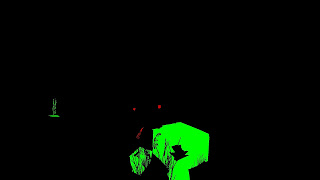 Okay, but how we distinguish here which pixels will be considered? We have to use stencil buffer!
During each of these calls a stencil test is performed to accept only these pixels which were marked before with "8" (first Draw call) or "4".

Visualization of stencil test for traces: 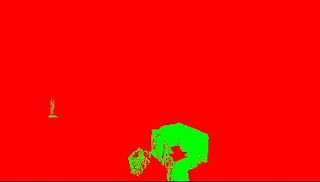 ...and for interesting objects: 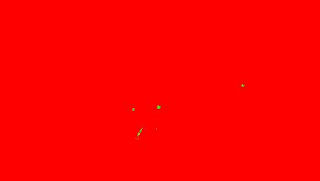 How the test is performed in this case? For basics about stencil test, here is good blog post about it. The general stencil test formula is as follows:

where:
StencilRef is value passed with API call,
StencilReadMask is a mask used to read stencil value (note it's present on both left and right side),
OP is operator used for comparing, it's set through API,
StencilValue is value of stencil buffer in currently processed pixel.

It's important to be aware that we use binary ANDs to calculate operands.

Knowing the basics, let's see settings used during these drawcalls:


Ha! As we can see, ReadMask is the only difference. Let's try it! Let's subsitute these values to stencil test equation:

Side note: All DrawIndexed(36) calls are related with rendering footsteps as traces, so the final look of intensity map in this particular frame is: 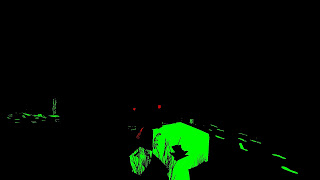 This pixel shader writes to only one render target, so lines 24-27 are redundant.

The first thing which takes place here is sampling depth (with point clamp sampler), line 1. This value is used to reconstruct world position by multiplication with special matrix and, after that, perspective division (lines 2-6).

Having Geralt's position ( cb3[7].xyz - please note this is not a camera position! ) distance from Geralt to this particular point is calculated (lines 7-9).

Later we have a bit tricky formulas to calculate intensity depending on distance from Geralt to object. My guess is that all coefficents were selected experimentally.
Final output is color*intensity.

And small comparison between original (left) and my (right) shader assembly.

This was the first stage of witcher senses effect. Actually, the easiest one.
Go to the second one here.