A new version of HLSLexplorer, 1.01 is done and available to download from here (Google Drive). The executable is working on Windows 10 and was built against Windows 10 SDK 10.0.17763.0.
If you would to like to play with source, it's on GitHub. 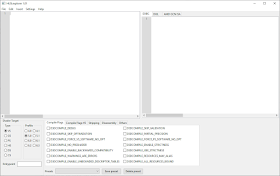 Let's go briefly through the most important changes:

Quite self-explanatory. I've been wasting too much time because of looking for a particular files so I did recent files list. Saved as recent.dat in HLSLexplorer's main directory. So far there is a limit of 8 files, but you can easily change it in source. There is also a fancy separator and an option to clear recents (no, it doesn't ask you to confirm). 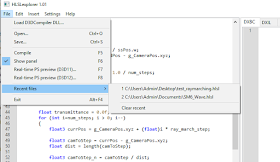 I've always liked Go To Line dialog from Visual Studio. Simple and very intuitive. So, I did the same for HLSLexplorer, because why not. It's useful for shaders since compiler usually gives you hints which lines are worth to check for problems. Just click on text window which is of your interest (HLSL or any of three assembly outputs) and Go to Line will know where to look. Of course, Ctrl+G works.

HLSLexplorer has just received support for D3D12 renderer backend. Well, finally, one could say.
It doesn't mean that D3D11 is gone. Because what real-time Pixel Shader preview does is just rendering of fullscreen triangle, I came up with simple IRenderer interface which nicely wraps all needed functionality.

Despite D3D12 backend is still really basic, I still found it fun to write because I have started learning D3D12 not so long ago, so that was a good opportunity to learn something new.

The new backend currently works with 2D textures only and is very error-prone. F7 opens PS preview with D3D11, F8 opens one with D3D12.

D3D12 renderer supports pixel shaders for both Shader Model 5.0 and 6.0+. So yeah, you can now visualize wave intrinsics! 😎 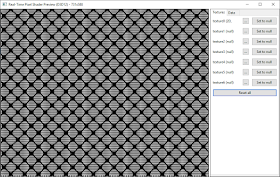 I got rid of all DirectXTK stuff since everything I needed was just loading textures.
Luckily, there are a standalone versions of DDSTextureLoader and WICTextureLoader, for both D3D11 and D3D12. You can grab them from DirectXTex github.

Real-Time Pixel Shader Preview informs now which API is used and what is the resolution of backbuffer.

These are the most important changes I introduced in the latest version of HLSLexplorer.
Feedback is always welcome :)